Best Things To Cook In A Cast Iron Skillet & Tips on How!

Kitchen Tips | Updated September 5, 2022March 5, 2020
My work is reader-supported; if you buy through my links, I may earn affiliate commission, at no extra cost to you. Full disclosure here.

Want to cook more things in your cast iron pan? There are so many recipes to cook in a cast iron skillet. It’s one of my most used items in the kitchen simply because it’s so versatile and tough. Definitely a favorite to have in your kitchen. Here I cover a bunch of ideas and some best ways for cooking in cast iron… 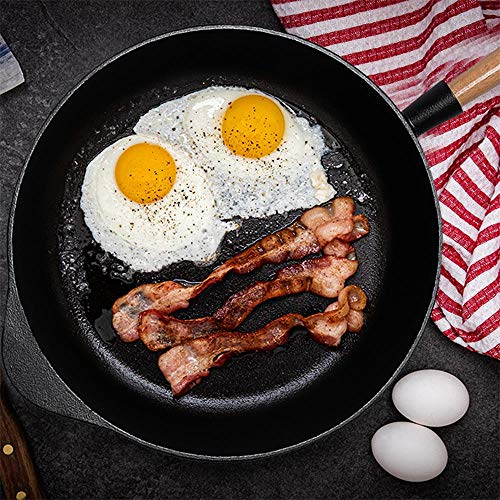 The upside is that an iron pan holds the heat really well.

Things to cook in a cast iron pan

There are tons of meals you can cook in a cast iron skillet. Here are ten that easily come to mind:

But the options are endless.

The way I do it is to add a small amount of coconut oil to the pan before heating it. I especially do this when cooking scrambled eggs and frittatas in a cast iron skillet. I find this is the best way to cook egg dishes as it primes the pan for cooking and avoids burnt-on residue forming.

At times, I use avocado oil or ghee in place of coconut oil.

One thing…cast iron pans heat slower and retain heat longer than other pans. So don’t let your eggs sit in the pan once they are done. You can turn off the heating element but the eggs will continue to cook.

Some people may not be sure about what temperature to cook eggs on cast iron skillet. I use low to medium heat, never high.

You don’t want overcooked dried out eggs or eggs stuck to the cast iron skillet.

I know some people prefer to heat the pan first and then add the oil or fat. To me, this is a matter of choice. I haven’t noticed any difference either way.

Shannon From Plan to Eat gives her way of cooking eggs in a cast iron skillet here.

I find cooking frittatas in cast iron skillets are an easy option for a quick meal. There are many ways of putting a frittata together. Here’s one…

With mine, I add the cheese to the top, then put a lid over the pan to allow the cheese to melt. I prefer my cheese this way. You can choose whichever way suits you. Be creative!

To cook pork chops, simply heat the pan to medium-high and add the chop. I don’t add oil or fat. Chops are usually fatty enough. (As long as the cast iron pan is seasoned, sticking shouldn’t be a problem.)

Let the chop cook in its own juices on the one side for a few minutes (maybe 3–4 min) and then flip to the other side.

Tip: Best to let one side cook till brown and then the other rather than flipping back and forth between sides.

Bacon done in a cast iron skillet is just the best! But it can tend to stick to the pan and leave bits of burnt-on residue that’s tough to wipe clean afterward. You can fix that sticking with just a few simple changes to how you cook bacon. I wrote about this in my article on cooking bacon in a cast iron skillet.

Cooking steak in a cast iron skillet is much the same as cooking pork chops, except with steak, you may need to heat the pan with a little oil, depending on its fat content.

Cast iron skillets are perfect for cooking pizzas. Though, I wouldn’t do this if it has a wooden handle or anything that’s not cast iron. Check out Thursday Night Pizza for instructions.

Many more things to cook in a cast iron skillet

There are so many things you can cook in a cast iron skillet.

If you are looking for more ideas, this article has 60 recipe suggestions.

When not to use a cast iron skillet

Acidic foods, such as tomatoes, will react with iron, which will leach into and taint the food. I cover this and more problem foods to avoid in my article on this very subject — what NOT to cook in cast iron.

Can I use a cast iron skillet on an electric stove?

Yes. Most definitely. The thing to remember is that they take longer to heat and hold the heat longer.  So regulating the heat may take some getting used to if you have been conditioned to using other types of cookware.

Can I use a cast iron skillet on a glass top stove?

How do you keep cast iron from scratching on a glass top stove? You can use case iron skillets on a glass top stove, but make sure to lift and place it rather than slide or swirl it around. The thing here to watch here is whether the skillet has a cast logo on the bottom of the pan. Any protrusions on the base of the skillet could scratch your glass cooktop because of the heaviness of this cookware.

I talk about this in my article on the best cast iron pans for your kitchen.

Why does my cast iron skillet leave a black residue on foods?

One reason for black residue on your food is the charring of food the last time you cooked. Any residue left after cleaning will char the next time you use the pan on high heat and will mix in with the food. Use oils with a high smoke point to avoid black residue forming from low smoke point types.

For more solutions, see my article on the black residue and what to do about it.

How much iron is added to eggs cooked in cast iron?