Appliances, Kitchen Tips | Updated August 12, 2022May 14, 2021
My work is reader-supported; if you buy through my links, I may earn affiliate commission, at no extra cost to you. Full disclosure here.

Looking at using an Instant Pot the first time? Like with any appliance, built-in features exist to make it easy to use. But, there are things to know to ensure smooth operation without mishap. The following is about what not to forget to do…

I like to feel confident in using a product. So I looked into it and discovered some user dos and don’ts for Instant Pot based on what the manufacturer had to say as well as advice from personal injury lawyers regarding appliances.

What is an Instant Pot? An Instant Pot is a pressure cooker, but also a multi-cooker. It can be a slow cooker, rice-maker, and yogurt maker, an all-in-one, depending on the model.

It was first introduced to the US market in 2010 and has since become one of the most popular kitchen gadget among home cooks.

Instant Pots are super useful for preparing nourishing meals — in an ‘instant’. 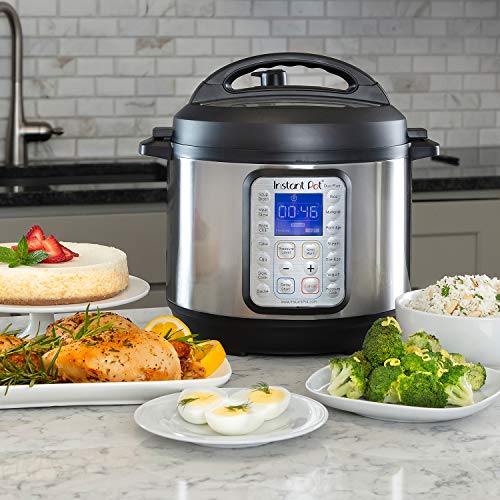 I compare an Instant Pot to a pressure cooker in another article on ceramiccookwarehub.com. I wrote how these type of cookers can reach temperatures of 250 ºF, which is 40º above boiling point of water. But let’s face it, people do worry about Instant Pots exploding, so here’s what to know so you’re more confident in using one the first time…

With any new device or appliance using electricity and high heat (also pressure), there are precautions to adhere to, with most being simple checks…

Secure the Instant Pot lid — Make sure it’s locked into place before proceeding with cooking/programming.

Check the sealing ring is in order

Every time you use your Instant Pot, check the sealing ring to make sure it is not cracked or damaged. If there are any signs of wear and tear on the sealing ring, replace it with a new compatible one before using again.

Check for clogging of the valve

Before cooking, always double-check that the steam release handle (valve) on top of the Instant Pot is not clogged or otherwise obstructed. Clean with warm water and dish soap on a regular basis.

Check the steam release handle is not covered

Never cover the handle with a cloth or other obstruction. The Instant Pot needs a free space on top of its lid in order for proper pressure control during cooking. This area can’t have any obstructions such as cloths which could block the vent’s opening resulting in a possible mishap.

Only ever open the unit after it has finished

Wait until it has cooled and pressure has reduced before opening the Instant Pot’s lid, as you would any pressure cooker.

Do not open during cooking, until it has completed its cycle and cooled down. Opening during any stage of operation can cause a dangerous malfunction and may lead to personal injury.

Don’t place hands or face over the exhaust valve (steam release handle) while the Instant Pot is in operation or cooling down.

Exhaust from a pressurized cooking vessel can release hot air, steam and liquid under high pressure that could impact you if you are too close to it.

Avoid moving the Instant Pot while in operation

Don’t move the Instant Pot while it is in operation. Wait until the cooking cycle has finished and pressure has been released before moving or taking the lid off of your pot.

Moving a pressurized appliance can lead to dangerous malfunctions and may cause injury.

Never force open the lid of an Instant Pot

If you have to force it, it means the pressure is high enough to create a quick blast that could cause injury or damage.

Wait until the Instant Pot has cooled down and pressure has reduced.

Take care with children around

Supervise your children when they are around an Instant Pot or any other pressurized appliance to prevent injury from possible malfunctions caused by accidental operation, including burns and scalds.

Can you leave an Instant Pot unattended? You can leave Instant Pots unattended. But while its doing its job under intense heat and pressure, it’s a good idea not to, even when using a timer. Instant Pots are pressurized units that can cause serious damage when things go wrong.

With cookers that release steam or build pressure, accidents can happen quickly without warning in cases of malfunction or inappropriate use.

Foods of the type likely to clog the exhaust valve are those that foam, froth, and sputter. These include applesauce, cranberries, pearl barley, oatmeal or other cereals, split peas, noodles, macaroni, rhubarb, and spaghetti.

Don’t overfill the pot. You should not fill up your Instant Pot to more than two-thirds full, maximum. For foods that expand—such as rice—only fill it to half of its capacity.

Moreover, leave some room at the top of your Instant Pot for steam during cooking time–don’t fill it entirely with ingredients. Watch out for foods that expand and increase in size when cooked, like rice or pasta.

Over-filling the instant pot may lead to a clogged vent pipe and excessive pressure build-up.

Don’t underfill the pot, either. Use at least a cup of liquid when cooking. Remember that a pressure cooker is designed to build up pressure in order to cook food quickly, so if you do not use enough liquid water or broth the pot will rise dangerously high and could lead to an explosion.

Never use Instant Pot for deep frying or pressure frying

Instant Pot should never be used for deep frying or pressure frying with oil. It’s not designed to handle frying of foods this way. It may cause a fire or severe damage.

Choose a skillet for shallow frying.

Deep frying or pressure frying should be done on a stovetop, in a deep fryer, electric skillet, and other appliances designed for this.

Instant Pots have a number of features installed for your confident use of the device. 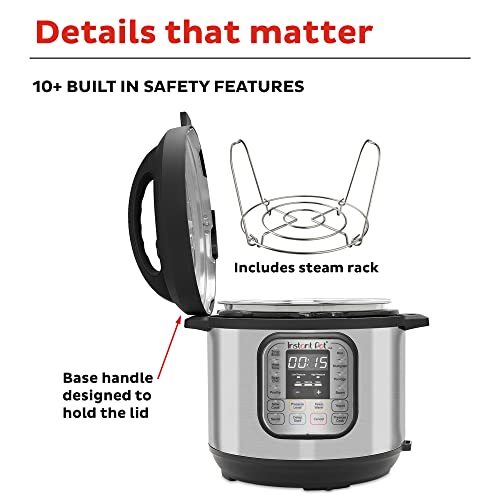 These features will vary among models, so best to check out the specs of the model you have or intend buying. Below are examples listed by the manufacturer.

Locking lid: The Instant Pot comes with a lid that locks to keep you from accidentally opening it while the contents are pressurized. The device also has a sensor on the lid that can warn us when there is an issue with the sealing of the dome, or if it’s in the wrong position for cooking.

Temperature control: In all Instant Pots, a feature called “cooking programs” adjusts temperature according to the dish being cooked. The instant pot also has a high temperature sensor that prevents food from burning. If the inside temperatures reach to high, there is a fuse cut-off that turns off the power.

Can the Instant Pot explode?

Yes. On rare occasions, Instant Pots have been known to explode. This might happen where the inbuilt features fail or the unit is not used as designed. Inappropriate use examples include forcing open the lid too soon or using the unit for deep frying.

It might seem like a lot of checks and balances, but it will become second nature once you’ve adhered to them a few times.

How to best avoid any Instant Pot explosions or other mishaps…