Skip to content
This site is reader-supported; if you buy through site links, we may earn affiliate commission, at no extra cost to you, to help with maintaining the site. Full disclosure here.

Dutch Ovens can be expensive and if you want to know what you can use instead for that recipe, read on for my list of alternatives that work just like a Dutch Oven.

To identify what to use instead in the case of not having a Dutch Oven, I had a good look at what a proper Dutch Oven meant and how it cooks…

What Is A Dutch Oven? What do you do with a Dutch oven?

It’s worth knowing that Dutch Ovens are cooking pots that use moist-heat to cook food (vs the dry-heat cooking method). What they do is lock in heat and moisture to cook tender nutritious stews, sauces, soups, and braises.

You can say a Dutch Oven is a traditional type of slow cooker. As the name suggests, the idea comes from the Netherlands, centuries ago, when they would cook meals in cast-brass pots.

It was an Englishman by the name of Darby who took the Dutch idea back home to England and modified it, using iron in the casting instead of brass for a cheaper version that matched the cooking style. He patented his creation as the “Dutch Oven” in 1707.

With this traditional cast-iron Dutch Oven, you’d cook your meal over a fire. With Dutch Ovens today, you use the stove top or the oven, depending on the cookware material. Some are not suited to all stove tops and others aren’t designed for the oven.

The main attributes is that it’s heavy gauge or thick-walled and has a cover that creates and holds moisture to steam, braise, stew or simmer ingredients. It usually has a lid but if it doesn’t, you could fashion one by folding and wrapping aluminum foil to fit.

Ceramic clay and enameled cast iron are the two most popular Dutch ovens today. If you’re looking to buy a Dutch oven, check out my article comparing ceramic with enameled to help you decide.

Now, for what to use if you don’t have a Dutch Oven…here is my list of alternatives…

A baking dish would be ideal as a Dutch Oven substitute for the oven as long as the baking dish contains the contents and has a cover. Check…It may not be suited to the stove top — I wrote about avoiding the use of ceramic baking dishes on the stovetop.

An electric slow cooker with ceramic inner pot will work the same as a Dutch Oven.

A casserole dish is designed to go in the oven. It can be used instead of a Dutch Oven in the oven but unless it’s made from cast iron or the manufacturer states it, it’s not for use on the stove top.

A traditional tagine made of clay can substitute for a Dutch Oven, somewhat. It has a conical shape and is used for making tagines. The problem with a tagine is that you are limited in what you cook because it has a shallow base.

A pure ceramic pot, like those made by Xtrema, can go in the oven and on the stovetop much like a traditional Dutch Oven.

On the stovetop, a frying pan instead of a Dutch Oven can work as long as it’s fairly heavy gauge, you have a lid for it, and it is deep enough to contain the ingredients.

Better still… on the stove, use a sauté pan (vs a frying pan) if you have one. This type of pan is better because it is deeper offering more volume to contain the ingredients and it usually has a lid. Once again it’ll work best if heavy gauge.

You can use a roasting pan instead of a Dutch Oven. With a cover, it’ll do the trick if you have no other options as a substitute for a Dutch oven. It’s an odd shape for most stovetop elements where cooking may not be evenly distributed.

A pyrex dish with lid can replace a Dutch Oven for recipes done in the oven but is not ideal for the stovetop.

You can use the Instant Pot to replace a Dutch Oven and adjust the cooking time accordingly (about ⅓ of the time). Also, the makers of Instant Pot now market an electric cast iron Dutch Oven.

A French Oven is similar to a true Dutch Oven apart from it having an enamel coating over the cast iron.

It’s more versatile than you might realise, since you can use an air fryer to replace many other cooking appliances. But, an air fryer uses dry-heat cooking and so is not ideal for preparing meals with liquids such as soups, stews, etc apart from reheating.

Modern Dutch Ovens on the market include this programmable one… 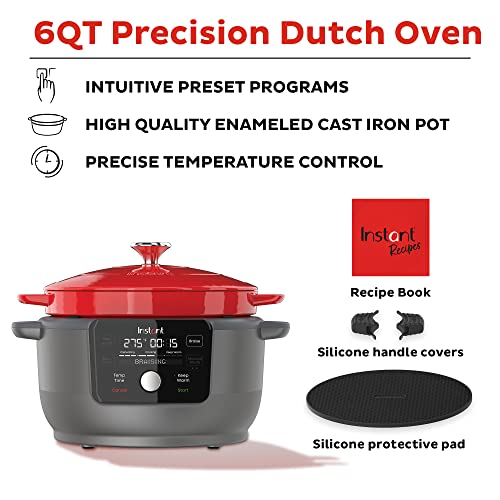 Xtrema’s Versa range of cookware is 100% ceramic. It’s versatile in that it can go in the oven, on the stovetop, and is classy enough for the table. Left overs can be stored in it in the refrigerator. This offers the convenience of keeping it all in the one container for less clean up afterward.

It is also dishwasher and microwave oven safe. With a 10 quart, you’ll have a size large enough to cook bone broth, make hearty stews, or steam side dishes.

This Emile Henry Dutch oven is beautiful with its hard glaze finish that won’t scratch nor craze. This one too is versatile in use on stovetop, oven, and on the barbecue. It has a 10-year warranty. 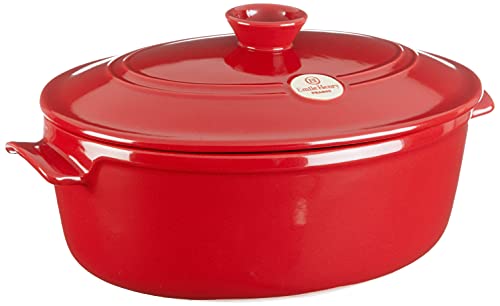 Back in the day it was a cast-iron cooker — today a Dutch Oven equates to a large pot with a lid. Or as The Britannica Dictionary defines it: a large covered pot.

Modern Dutch Ovens come in other materials including solid ceramic. Enamel cast iron is a French Oven version, which is also refered to as a Dutch Oven at times.

So if you’re wondering what can I use as a substitute for a Dutch Oven — have look at the appliances and cookware you have in your kitchen. One or more could serve the purpose of a Dutch Oven for the steaming, stewing, braising, and slow cooking needed in that recipe.

Hi, I’m Crystal, the editor of ceramiccookwarehub.com, a site primarily devoted to ceramics while also covering a range of options for the home kitchen. This is so you can compare and decide on what’s right for you. I believe the best meals start with the cookware that gives you the satisfaction you desire. I like to write about what I discover to help you with buying, using, and maintaining these wares… making the choosing and maintenance easier for you.