What Not to Cook in Cast Iron

Kitchen Tips | Updated September 5, 2022October 14, 2021
My work is reader-supported; if you buy through my links, I may earn affiliate commission, at no extra cost to you. Full disclosure here.

A cast iron skillet is highly versatile when it comes to cooking. But are there some foods you shouldn’t cook in cast iron? Here I look at ones that can cause problems plus how you can get around the issue.

Foods that interact with cast iron

Cast iron cookware is made of iron and this is the reason it interacts with some foods. Acidic food is one type. It includes tomatoes, lemons, limes, and wine. Another type of food that can create a problem is seafood when cooked on cast iron skillet because it can leave a persistent odor that affects the food you might wish to cook in the future. Garlic is another.

There are many things you can cook in cast iron. But what happens when you cook with acidic foods is that minute amounts of iron molecules leach into the food being cooked. The problem is that it taints the food with a metallic taste.

For most people, the extra iron does not harm them (it may benefit them). Iron cookware has been used for more than a millennia. It’s considered one of the oldest types of materials used in cooking.

If you’ve ever made a tomato based sauce in a cast iron pan you may have noticed the flavor is a bit off. It’s tainted. I has a metallic taste to it. This is because the iron has leached from the cookware due to the acid in tomatoes. This happens when you cook acidic food in cast iron for a time, e.g. 30 min is reported by Lifehacker.

Tomatoes have a pH of about 4. The lower the value the more acidic is the food (see infographic).

So what about cooking Lemon Chicken in a cast iron pan? Adding lemon juice to a cast iron pan could cause the release of iron into the food. But if it’s only a squeeze of juice going in with a volume of other ingredients, it may not matter so much as the acidity is diluted.

Lemon and limes are highly acidic. They have about the same pH — 2 to 3 and are more acidic than other citrus types, i.e. oranges.

Vinegar is acidic. It has a pH of 2.5 to 3 typically. The same applies to vinegar as mentioned for lemons and limes.

Why not wine? It is acidic with a pH level around 3.1 to 3.4 on average. A splash of wine mixed in is probably not going to be a problem.

One way to fix this, after using the cast iron this way, is to clean the skillet with baking soda, which is useful for neutralizing odors.

Another is to make sure the cast iron cookware is well seasoned before you use it.

Plus, check out the points given for garlic…

Garlic has a pungent odor and like seafood can leave a lingering odor in the cast iron pan. To freshen the pan before next use, try these fixes:

If your cast iron pot or pan has a wooden handle and can’t go in the oven, the baking soda or salt method suit best. This is similar to the deep clean method I mention in How to Clean a Cast Iron Skillet.

Which ever method, make sure to re-season the cast iron cookware afterward so that the next time you use it, it is less likely to have these problems.

How to get around this…and cook anything in cast iron

Season the cookware. I show you how in this article. Seasoning seals the pan and adds a carbon layer between the iron and the food. This greatly reduces the chance of iron interacting with the foods being cooked.

Your other option: Buy the enameled type of cast iron cookware when you’re out there choosing cookware. If you have an enameled cast iron, the enamel provides a layer between the food and the iron. The downside to enamel is that it will stain, but I show you ways of getting rid of the stain in this article. 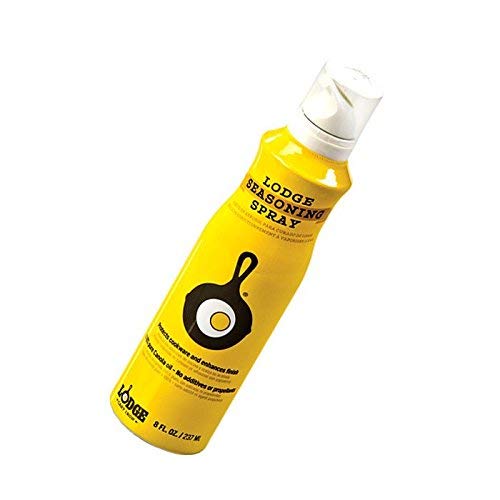 Can you cook anything in cast iron?

Yes, you can cook anything in cast iron as long as it is well seasoned. Some foods, especially acidic types, will interact with the iron and this is why a well seasoned pan is highly recommended.